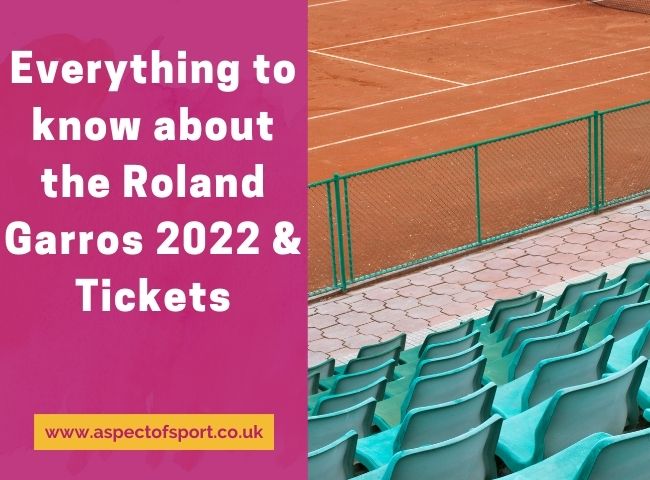 Every year we see the best of the best in the field of tennis battle it out for Grand Slam glory across the globe. There are four Grand Slam tournaments annually – referred to as majors; these tournaments offer the highest ranking points and attract the most extensive fanfare.

The French Open, better known as the Roland Garros, is perhaps the most vibrant. It takes a special place in every player and fans with its excitement and the atmosphere. Above all, the tournament is the only Grand Slam played in clay, making it extra special.

The tournament is named after the French aviator and fighter pilot Roland Garros who was notable for his escape from the German camps during World War 1 before being gunned down in 1918. The French Open commemorates his efforts for the country and as a tennis player.

As a tennis fan, you know the intensity of clay courts. Players need to be skilful and showcase their agility and fitness when it comes to the clay courts.

All of these combined makes a perfect game of tennis. You can be a Federer fan, a Serena Williams follower or a Nadal fan, making it to the French Open in Paris every fan’s dream.

Every year, the French Open attracts some of the best world-renowned tennis talents from around the world. The Roland-Garros single draw is a 128 player field with 108 direct entries, 16 qualifiers, and eight wild cards. The doubles draw consists of 64 teams, 57 direct entries, and seven wild cards on the opposite end.

Along with the tournament participants, the French Tennis Association, the organizers of the Roland Garros, offers total prize money of $29.4 million. The winners of the French Open will each receive £1.38 million along with 2,000 points, and the runners-up will take home a sum of £647,000.

There’s a lot of excitement ahead of the Roland Garros with everything happening in the tennis arena. With Novak Djokovic remaining firm in his stance of not getting the vaccine, the defending champion of the men’s singles will most likely not feature in this year’s tournament.

Rafael Nadal is the hot favourite in the 2022 draw on the men’s side. Early this year, his Australian Open triumph has brought renewed hope and fanfare around him. Nadal defeated Russia’s Daniil Medvedev, 2-6, 6-7, 6-4, 6-4, 7-5, to become the leader in Grand Slam titles in men’s tennis history with 21. The five-hour, 24-minute battle came down to the wire and left the two competitors fighting with what little energy they had left in their tanks.

Nadal’s tenacity and experience gave him the edge at the very end.

The Spaniard already has 13 French Open titles under his name, becoming the most successful player at the event with a 105-3 record. Nadal’s Australian Open victory meant that he now has more Grand Slam titles than any male player in history with 21.

With the hype around Nadal and the other developments, there have been quite a few fans already rallying to purchase Roland Garros tickets to see the legend in action. As he reaches his last few years, these might be one of the last tournaments we will see him play.

The women’s competition will be an exciting match-up with no clear favourite in the draw. Last year’s winner Barbora Krejčíková and runner-up Anastasia Pavlyuchenkova are not making any headlines in terms of any wins.

However, Australia’s Ashleigh Barty can be named a favourite based on form.

When it comes to the clay surface, it will be a test of skill and physical strength and endurance. Because of that, it is safe to say that the French Open title could be anyone’s – it all depends on how you play on the day.

While Nadal will be the hot favourite for the competition, the latest news confirms that Stan Wawrinka is set to make a comeback at the Roland Garros.

After a year plagued by injuries, the man from Lausanne is ready to hit the courts just in time for the clay season. Wawrinka was last seen in Doha in March 2021 and had to keep out due to injury.

But making a comeback after a series of operations, the 37-year-old adds that he is all geared up for a comeback at the upcoming Roland Garros. The news has excited more fans ahead of the release date of Roland Garros tickets.

Making it to the Roland Garros

Paris never ceases to amuse, and when Roland Garros comes alive, it becomes even more vibrant. If you purchase Roland Garros tickets and make it to Paris, you’ll feel this. There’s a sudden festive atmosphere all around the city.

The Stade Roland Garros (Roland Garros Stadium) is the action’s home. The stadium in Paris consists of twenty courts, including three large stadiums inside where all the crucial matches take place.

Expect all semifinals and selected quarterfinals to take place in these courts.

The three stadium courts that you need to know:

The historical importance, intense competition, and amplified rivalry have made the Roland Garros tickets skyrocket in demand. There are several weeks to go for the tournament, and the waiting lists for tickets are at a record high.

Second to the Wimbledon, every tennis fan wants to be in any of these three stadium courts when the action comes down to the final 16. But, the chances of getting a ticket to even one day – impossible!

You’ll constantly be checking the Roland Garros tickets status on their official website and the app, but it’s a tough challenge. Instead of relying on a mode that will not guarantee you a ticket, Seatsnet offers every fan an easy and seamless way to get Roland Garros tickets.

The largest ticketing destination dedicated to sport and music events across the globe, the platform simplifies getting a ticket. All you need to do is head to the platform, select the tournament, and look for available options.

Here you will find a list of resellers who listed their open tickets. You can filter out the dates and the courts accordingly and find the one that fits in a matter of seconds.

The ticket resellers on the platform are all verified individuals and go through a series of security checks to ensure authenticity. So when you make the purchase, you know that you are getting your hands on authentic Roland Garros tickets and notcounterfeit ones.

What you need to do when making a purchase –

Canada’s new era of talent could lead them to the 2022 World Cup.

What I Learned from “Church Street Boxing”